Carpet cleaning methods vary a bit around the country, but Phoenix carpet cleaning and Scottsdale carpet cleaning here in Arizona, traditional Hot Water Extraction, also known as “Steam Cleaning” is the most popular choice for light to medium soiled residential and commercial carpets. Steam cleaning is the process whereby hot water, at temperatures near 240 degrees (steam), is injected deep into the carpet fibers at approximately 500 psi to loosen and dissolve dirt, grease and other particles. The carpet wand that is used to inject the water also has a vacuum process that extracts up to 95% of the moisture, along with suspended dirt, debris, and oils. Due to it’s high temperatures, hot water extraction can also kill potentially harmful pathogens, such as listeria, salmonella and E. coli. 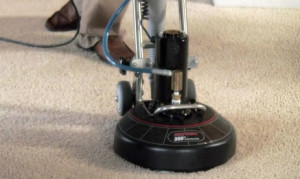 Sometimes, residential carpet is so soiled that it’s necessary to use more aggressive methods. For these occasions, a rotary extraction tool is generally used. This is a piece of equipment that has a weighted head to press the cleaning heads deeper into the fibers. The cleaning heads inject hot water deep into the carpet while rotating in a circular pattern, at speeds up to 100 revolutions per minute. Next to each jet is a vacuum port, so the water is immediately and effectively removed along with any suspended particles, dirt, debris, oils, etc. Because of the rotary motion which agitates the carpet fibers, this method removes more debris and water that traditional steam cleaning wand-type equipment.

In the case of commercial carpet cleaning here in Phoenix and Scottsdale, there is an additional method that is quite effective called low moisture encapsulation, which works on a similar process of chemical dry cleaning. Low-moisture encapsulation also has the additional advantage of being an eco-friendly alternative to Hot Water Extraction, using only one gallon of solution per 300 or more square feet of carpet. The end result is a fast-drying carpet that is ready for use immediately after cleaning. It’s also the fastest method of cleaning which can cover larger sections of carpet in a shorter amount of time, making it an economical choice for spaces that require frequent professional cleaning. For high-traffic commercial spaces, it’s the best way to maintain a professional-looking and hygienic floor year-round. Low-moisture encapsulation is a three-stage process. First, a low-moisture encapsulant is applied to the carpet surface, which coats dirt molecules in preparation for removal. The encapsulant application is followed by a rotary pad, which agitates the carpet fibers and encourages them to release the soil molecules. The loosened soil molecules are then collected over the next few maintenance vacuum cycles. Any left-over encapsulant actually helps maintain a cleaner carpet, since it is coated with a polymer that repels soil and other contaminates.

In comparing steam cleaning with a chemical-dry or “low-moisture” process, it should be noted that there are drawbacks with each which should be taken into consideration when choosing which method to employ for the given circumstance. Hot water extraction is the more aggressive process, which lends itself to removal of more debris. The drawback of steam cleaning is in reference to commercial carpeting that is glued to the subfloor. Steam, if used repeatedly over time, can contribute to delamination, the breakdown of the glue processes holding the carpet to the floor, causing bubbles to appear and expand in size. Steam cleaning glued-down commercial carpet also lends itself to stain wicking, which is the process of residual materials between the subfloor and carpeting that wick back to the surface as the carpet dries, sometimes leaving that carpet looking worse that before the cleaning. Low-moisture encapsulation, although not as thorough a cleaning, alleviates both the substructure delamination and stain wicking problems, simply because it isn’t injecting and leaving large amounts of water in the carpeting. Therefore, glue isn’t damaged, and the fast dry times (~1 hr) don’t lend themselves to wicking.

The drawback of low moisture encapsulation is especially evident in residential carpet cleaning. The process, although relatively effective, doesn’t lend itself to an aggressive deep cleaning of the fibers like found in hot water extraction, generally cleaning nearer the surface than really deep. In addition, because of the length of fibers in comparison to commercial carpet, and the ability of soils and encapsulated debris to fall deep into the fiber bed or into the padding, vacuuming out the residual material, like can be done in commercial, isn’t as effective in residential environments.

PART 2: How do you know that your carpet guy really cleaned your carpet?
April 4, 2016

How do you know that your carpet guy really cleaned your carpet?
March 18, 2016

How often should you have your carpets cleaned?
February 19, 2014
Recent Posts
Recent Comments
Archives
Categories
Meta